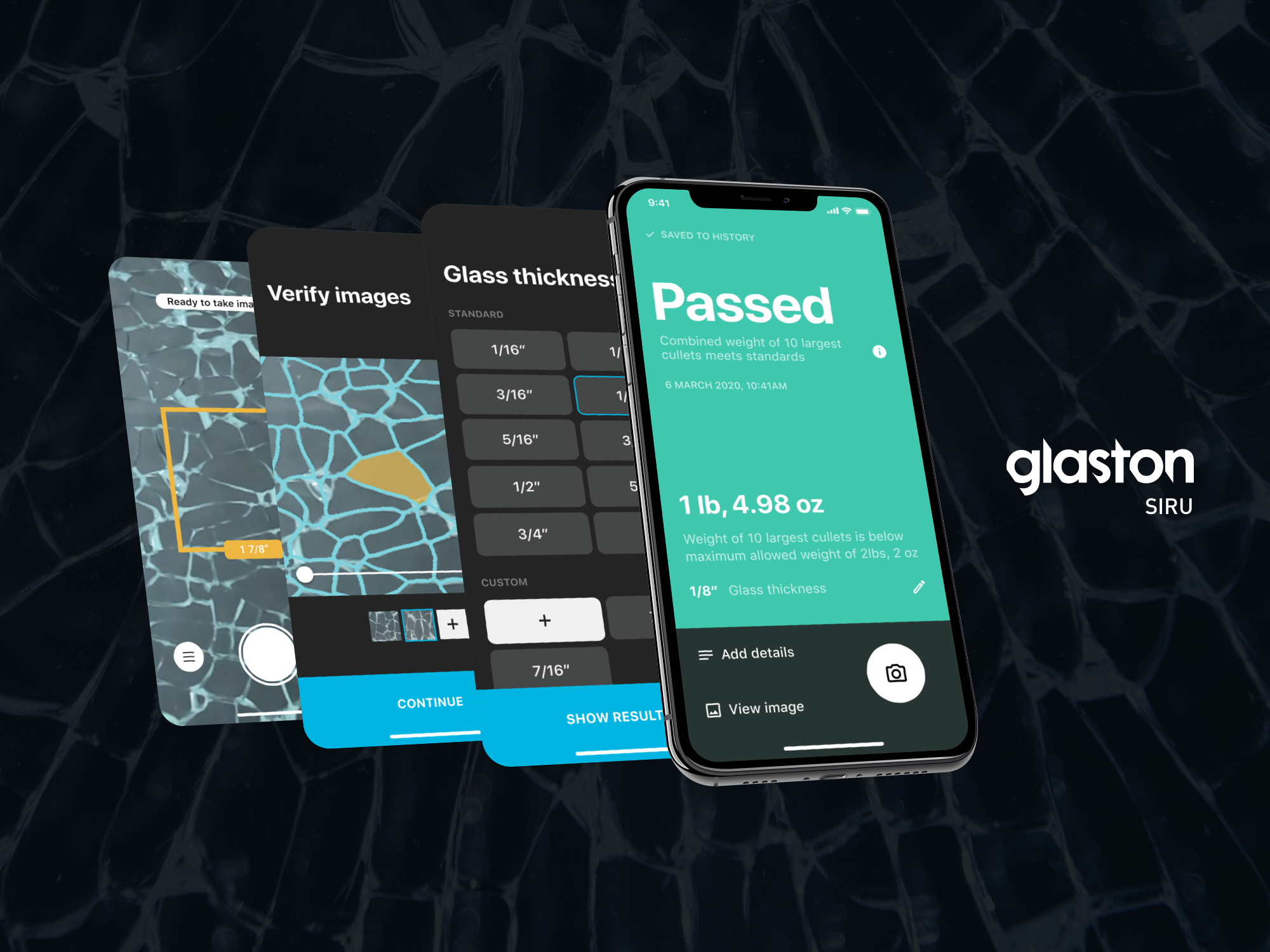 Glaston Siru — An industrial revolution in the making

By nature, tempered glass is shatterproof. When it breaks, it breaks into smaller pieces making it less dangerous to humans. Advanced machinery automate the manufacturing process fully with little human intervention. However, the overall quality of a batch of glass is controlled by something called the glass fragmentation test, usually carried out manually by a human worker.

This industry standard test provides crucial insight into the quality of the process and the manufactured glass. This is how it works—large sheets of tempered glass are produced in batches and a factory worker takes a test sheet of glass and breaks it. Depending on the standard used, the pieces are either counted manually within a certain area, or the largest fragments are weighed to determine whether the batch meets the quality standard. This makes the whole process slow, tedious, and imprecise.

The workers have to do this several times a day, at minimum every two to three hours, or every time the glass thickness changes on the manufacturing line. The results of the test vary depending on the glass thickness and several safety standards. In addition, the results are documented with pen and paper on stickers, photographed and manually organised in folders and journals. This is not modern, nor an efficient use of anyone’s time.

An advanced design-led approach for an analog environment

In January 2019, Glaston approached Nordkapp to demonstrate a proof-of-concept app that required designing from ground up. The app aimed to disrupt the glass fragmentation tests both in terms of speed and cost-savings by simply using a smartphone. An outcome of Glaston’s measured efforts towards digitalisation, the demo-app was an in-house development effort and meant to be showcased at the upcoming Glass performance days (GPD), a pioneering conference dedicated to the development of the global glass industry.

Together Glaston and Nordkapp decided to improve this experience at the manufacturing line. The result, Siru, is a free app for iOS and Android, and uses a smartphone camera, computer vision, and AI to conduct the glass fragmentation test.

"Even though the process is defined by the standard, the actual result always depends on the examiner, because the process itself is so subjective. For example, when the size of the fragments is really small, humans may just ignore some of the fragments due to negligence or a lack of concentration."
— Glaston

Little time to innovate, but with a world-class team

The first phase of our partnership was fast paced and focused primarily on the design & development of iOS & Android applications scheduled for launch at GPD. Our team put together a strict timeline of goals, tasks and deliverables—with Nordkapp leading the design of the applications and working closely with the development teams at Glaston and Finlabs, leading the development for iOS and Android applications respectively. Due to remote locations (Helsinki, Oulu and Tampere) our team communicated on Slack while prioritising face to face contact sessions at every milestone of the project.

After collaborating and releasing the first version of Glaston Siru in mid-2019, which addressed the European standard glass fragmentation test, Glaston and Nordkapp reconvened at the end of 2019 to begin work on designs for a new process that would meet the American glass fragmentation standard.

This required beginning the user experience design anew. Once again Nordkapp led the design of the application, bringing a more immersive user experience including dark mode to iOS and Android, digitally working alongside Glaston‘s development team to bring the new version to life.

To validate and re-design the original proof-of-concept app, the team at Nordkapp visited the Glaston-Rakla factory to observe the process up close and interview factory personnel—the primary users of this app, to understand their pain points. With key takeaways such as solving repetitive tasks such as manually counting or weighing fragments and noting details manually on stickers, the app had a clear list of features to start designing. Through these visits, a plethora of newer opportunities that were noticed and discussed, some of which were then addressed in the second phase of the project in 2020.

A tool for the production line
The app is intended for professional use on a manufacturing environment that runs 24-7. As soon as a batch of tempered glass is collected at the conveyor belt, the fragment test must take place within 3-5 minutes after the test-glass is fractured, to avoid secondary cracks from forming. It was necessary that Siru became one with the production line without adding any additional steps. To facilitate this, the app always launches immediately into camera mode with real-time augmented reality markers that guide the user to correctly position the phone and photograph the targeted areas of the sample test glass—every single time. Having no tutorials removed the need for trainings hence making it easy for anyone to use. Additionally, the app utilises large touch targets to enable precision and avoid accidental inputs.

Seamlessness
Once the sample glass is photographed, the image is instantly uploaded and processed in Glaston cloud, delivering results within seconds. A seamless user-experience is key from the app launch to processing results, chaining it together as a single task with actions to save or repeat the test. Details that were manually written to a sticker and pasted on the glass were also made available in the app, allowing its users to provide crucial information such as glass thickness, order number and additional notes. Together, these demonstrated the shift towards storing and making this data visible and transparent immediately to managers.Connectivity challenges within factory environments were considered and the app also allows local computing using the Phone’s GPU in such situations.

Personalisation and scalability
While we focused to demonstrate a core functionality through this app, we focused on the future of the application and its ease of adoption. The design was kept fairly simple to enable fast-customisations and use of system fonts on iOS and Android with minimal branding. As development time was critical for the project, the design process relied heavily on prototyping the app flows in high-fidelity demos to communicate complex ideas early with our developers and validate them, staying realistic in our expectations while striving for quality. This approach brought us some bonus hours after primary goals were met and we could implement newer ideas and adjustments to improve the overall experience of the application. Most importantly, ample testing was carried out as a focused effort across the team which allowed us to release a confident and scalable product into the world.

The initial launch of Glaston Siru at GPD in 2019 resulted in positive reviews and pleasant surprises from PhD students and customer groups, and garnered international interest. This success resulted in further collaboration between Glaston and Nordkapp to bring to life a further iteration of the application.

As a strong foundation is built, integrations will emerge as possible next steps in the evolution of technology and data aided glass manufacturing and design. For now, Glaston and Nordkapp continue their partnership forward. All said and done, what’s accomplished is just the tip of the iceberg.

… A customer said that they have been trying to get something similar for the last 5 years without success. They were concerning to buy a 25k€ measurement device but now they have the same thing for free.
Ville Patola, Data analytics lead at Glaston